The Office for National Statistics (ONS) published its 2020-based interim national population projections on 12th January 2022 detailing the projected life expectancies for the UK.

This is the first update since 2018 and offers an insight into the impact COVID-19 has had upon the UK populations, seeing some adjustments to the short-term mortality assumptions methodology to reflect the impact of the pandemic.

This has resulted in a reduction in projected life expectancies since 2018 as follows: 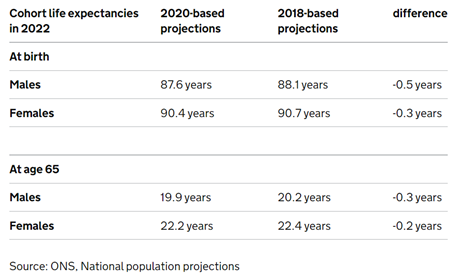 So, why is this important to personal injury practitioners and insurers?

The reduction in life expectancy brings into question the validity of the current multipliers contained within the 8th Edition of the Ogden Tables. For those unfamiliar with the tables, they are utilised to assist with calculation of the lump sum compensation due in personal injury and fatal accident claims. The tables provide multipliers that are applied to the here and now value of a future annual loss or expense to take into account accelerated receipt and mortality risks.

The latest edition of the Ogden Tables are based upon mortality rates from the 2018-based projections thereby resulting in potentially overinflated multipliers and overly ‘generous’ awards of compensation.

Interestingly, there has been a systematic downward trend and principal projection of period life expectancies between the 2012-based and 2020-based projections:

Given the above, it is arguable the multipliers contained within the 8th Edition of the Ogden Tables are now based upon ‘too generous’ projections of life expectancies resulting in the potential for claimants who have suffered lifetime losses being overcompensated. Accordingly, in principle, it should therefore be open to personal injury practitioners and insurers to argue the Courts should depart from the standard Ogden Table multipliers and adopt reduced multipliers utilising the most up to date projected life expectancies.

However, it remains to be seen whether the Courts have any appetite for such arguments. Any such attempts to deviate from the norm are likely to require specific expert evidence to justify changes to the life expectancy, something that, to date Courts have been very reluctant to allow previously in the absence of particular factors impacting upon an individual’s life expectancy (either in relation to their injury, or due to another co-morbid condition)

Judges may be unwilling to depart from the standard approach as to do so could encourage litigators to attempt to abandon the Tables completely, resulting in complex time-consuming litigation around multipliers and life expectancy in every case - something the courts are unlikely to encourage!

Judges may also believe that departing from the Tables on the basis of a temporary ‘blip’ in the data due to COVID-19 is too much of a knee-jerk response, particularly when the information of the Government Actuary Department suggests there is a lack of consensus as to the impact of COVID-19 in the short term. The courts may say that it is premature and speculative to depart from the Ogden Tables until there is more clarity on the impact of COVID-19.

Even if the courts were amenable to such arguments, they cut both ways; in appropriate cases claimants may seek to adduce bespoke life expectancy evidence that a particular individual may have a longer than average life expectancy, thereby resulting in an elevation of the multipliers and overall damages paid.

It remains to be seen whether there is appetite for arguments that the courts should depart from the standard Ogden Table multipliers and adopt reduced multipliers utilising the most up to date life expectancy projections.

It is more likely than not that the status quo is maintained until updated Ogden Tables are produced. Ideally, the Ogden Working Group will utilise these new figures and publish updated tables to factor in the revised data.  However, given the fact it was 9 years between the 7th and 8th Edition of the Ogden Tables it remains highly unlikely that we will see this in the short term. We note that the 7th Edition used 2008-based population projection figures for producing multipliers, and so the data was 10 years older than that used in the 8th Edition, during which there was a sequential reduction in principal projection of period life expectancies, none of which encouraged expedited publication of the 8th Edition.

Realistically, any adjustment to the Ogden Tables is likely to follow from the next Discount Rate Review, which according to the timetable set out in the Civil Liability Act 2018, is expected in 2024. The Ogden Working Group may use this as an opportunity to revise the figures based upon the updated projected life expectancies data. Time will tell!